Mother With a Chinese Adoptee

The story of Anne Donohue in her words 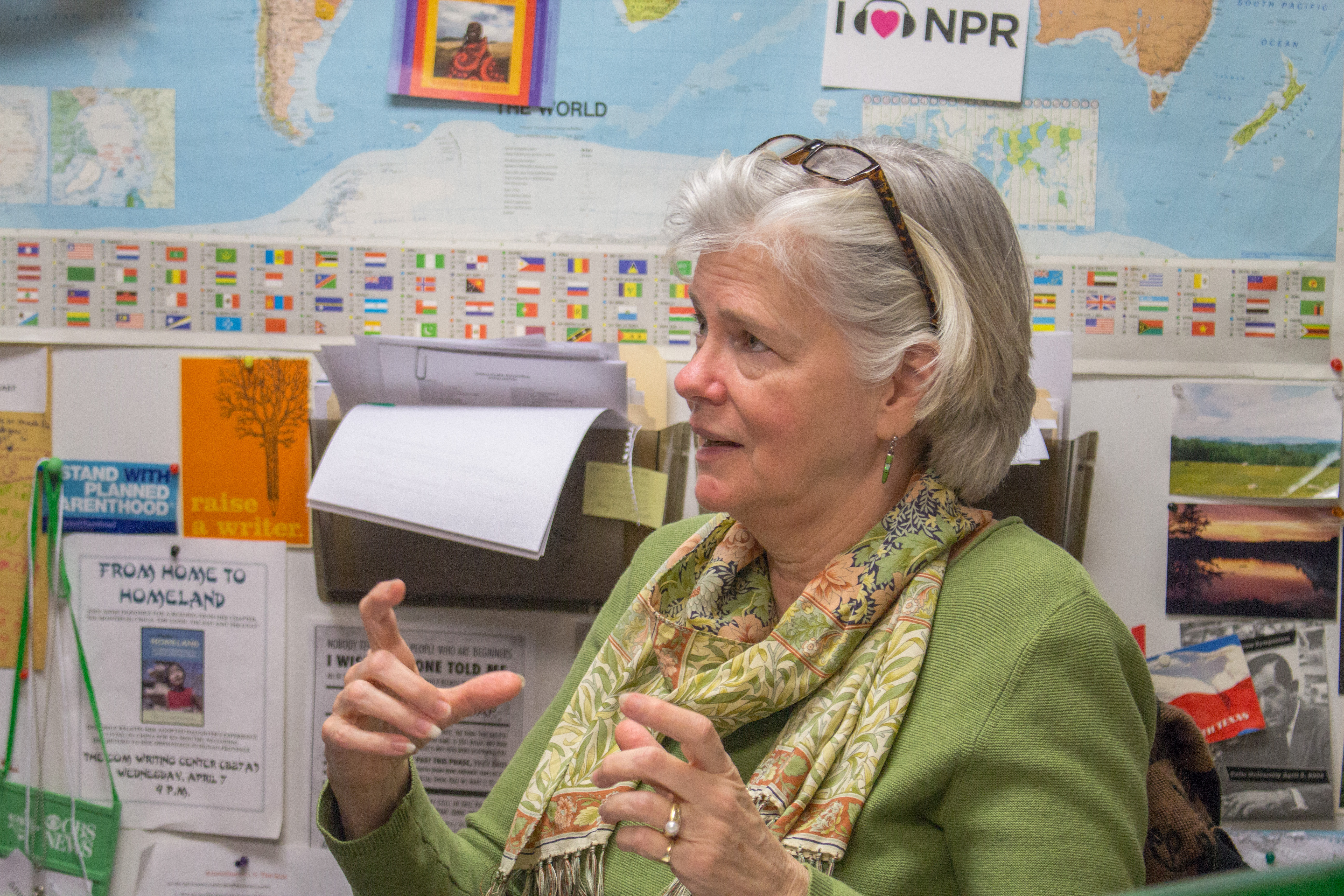 A journey that was not smooth – “We are out. We are not gonna do it.”

I started applying for international adoption in the summer of 1995. We put together all the police, FBI, family and health records – about this big of paperwork to send to adoptee adoption agency, and waited, and waited, and waited. Two and a half years later, I got a message from the international adoption agency saying that you need to do all paperwork again because it’s going to be expired by the end of this year. In October, I said if you can’t do it before these papers expire, we are out, we are not going to do it. We are going to take legal actions against you, because of false advertising and false promises. And a week later, on November 19, 1997, I got a picture of our daughter in the mail. She was born on July 20th, 1997.

I left by myself first week in January. I flew to Changsha, China, and got off the airplane. There was a man standing and waiting for me. He was our guide. A few hours later, five families from the U.S. got off the plane. We all went to the hotel together and became best friends for life. Next day, early in the morning, it was freezing cold in January and snowing. The doors opened, and these Chinese women carried Chinese babies. Tears flowed. Everybody was instant families. We were very happy. Then we got on a bus with our babies and drove four hours down a muddy one-line road, playing chicken with the coming traffic. We went to the orphanage and passed a lot of papers and planned a lot of documents, and got a Chinese passport for her. And then we went back four hours on this dirt road with screaming babies no diapers, not much formula to feed them. It was hysterical. We were laughing and crying, which was instant bonding and a lot of fun.

Why would I adopt a Chinese kid?

When I was a kid, I grew up in a Catholic family and we were very concerned about poor starving children all over the world. And I sort of had this missionary zeal to save the world. My dream as a child was to have 20 kids from countries all over the world. Then I grew up and had children of mine. I realized raising a child is hard and there is no way for me to have 20 kids in my family. However, one year, I did a story on a single dad. I went to the home of this single father who adopted a little girl from China. I came home from that interview and told my husband that I would like to do this too. Surprisingly to me, he said, “me too”. So later I looked online. Two days later, there was an open house at an adoption agency at Newton and my husband went there. When he came back, he said:”Yeah, I think we should go for this.”

Birth parents -“We are not allowed to know.”

We were told that Katie was left at the front gate of the orphanage. We would not be allowed to know who the birth parents were. Subsequently, in 2008, I went back to China for the Beijing Olympics and taught at Renmin University in Beijing. One of my students happened to be from Yiyang, Hunan, the same place Katie was born, which was unbelievable. So I went home with her in the summer, and her father started the search for my daughter’s birth family. He went to the old orphanage and asked lots of questions. However, ultimately, we were still unable to find out anything.

Relationship with two brothers-“She’s the leader of the pack.”

She is the glue that holds our family together. She is just much happier personality than what our genetic materials can produce. High energy, lots of fun, always wants to do something together. She gets along really well with both of her brothers. I think because my sons are older, one is eight years older and one is ten years older, so I do think they feel protective of her. I remember when I brought her to school with me, my son was then in third grade or first grade and he just brought her in like a show and tell. To show everybody in the class that this is his new baby sister and then he just looked up and he said, “why does she have to be so cute?” Because she was like the most adorable baby and she was also a smiley, happy baby. The first day we had her home, they put her on a baby blanket and dragged her on the floor around the kitchen, say this is the refrigerator, this is the stove, and this is the cabinet where your food is going to go and they just kind of dragged her around the house and showed her everything and it has been true love ever since. Katie and my sons, they have plenty of fights, true, but it’s all about chores and unfun stuff. When fun comes along, she’s the leader of the pack.

How Katie found out she was adopted

We happened to live in a community where we have plenty of Chinese adoptees, so we have playgroups with other Chinese adoptees. So there wasn’t a moment she just figured out she was adopted. I think it happened gradually. She didn’t tell me when she was first grade, things just daunted on her in a way that she cried, wondering what happened to her other mother. But we’ve been very open to this. We celebrate the got-you day in January and her birthday in July. We celebrate Chinese New Year. She has two birthdays and other presents that her brothers didn’t get. So she is kind of proud of her status in our family.

She can convince us to do almost anything. She makes a very strong argument about whatever she wants to make happen in her life. She is very thoughtful, researches her points, makes her points, and usually wins the argument. So she is strong-willed but not in a mean way. She is just a lot of fun.

Does Katie have biological siblings?

A couple of summers ago, she said, “I really want to do an ancestry.com genetic test to see if anyone else gets my same gene because I’ve heard several Chinese adoptees are either twins or separated at birth and they find each other.” She did the test but unfortunately came back with no relatives. She found out she was Chinese, shockingly, and she found out she had no medical prepositions towards any disease, which is good news. But I do hope, as China liberalize and opens up, if Chinese mothers of these children want to find out what happened to their daughters, and my kids and the adoptees she cohort with also want to find out more about their birth parents, I do think DNA is the way to bring them together if they choose to search.

The role of Chinese culture in Katie’s life

When she was a child, we went to Chinatown and had Chinese students over for meals. They made dumplings with her and we gave her the red envelopes with money in it as a traditional celebration during Chinese New Year. We did whatever we could do to recreate Chinese culture. We were living in China when she was in fifth grade and she had an option to learn Chinese. Then in sixth grade when she came back to the United States, she had to choose among Spanish, French and, Chinese as her foreign language. She chose Spanish. I said, “You are crazy. You have already got a head start on Chinese and you might want to use it someday.” She said, “no, no, no, no. I want to do Spanish.” I would say right now she would describe herself as an all-American kid with Chinese looking, but not dedicated or focused on Chinese culture.

What is Katie doing now?

Katie is studying strategic communications at Elon University in North Carolina. She hates New England, but then some days she says she is going to come back to Boston and be with her high school friends. I think she will end up where her friends end up, because she’s got a slew of friends. he always likes to have people around her and play with and hang out with them.

My deep concern about adoption

One thing that really tortures me is the saddest part of this whole thing. When I did this research about the baby selling and the corruption in the adoption system, we found out that we were told initially that these women gave up their children because of the one-child policy. But now we find out that maybe they were forced to give these kids up. They were told that they were going to be taken away for a month or two, and then when they went to the orphanage to find their child, the child was no longer there and had been sent off to the United States.

When this father of my student did research in Yiyang, one of the terms that women around the orphanage used was ‘baby-selling’. People come here to buy babies. Americans come here to buy babies. And people come here to sell babies. That makes me very uncomfortable and very sad to think that I might have been part of a corrupt process. So I really hope that DNA matching system or some other technological innovation will figure out how to get these women to find out what happened to their daughters. I have given birth to two children and I can’t imagine giving birth to a child and letting that child go.

Back to Home Page
Go to Amy's Story