International adoption is not colorblind. Widely considered a humanitarian gesture, it is not exempt of race, gender, prejudice, and privilege.

Anne Donohue, a journalism professor at Boston University, acknowledges the politics of adoption, in her own adoption of a Chinese-American girl Katie.

America's inter-country adoption rose to prominence at the end of World War II, with a large-scale number of children orphaned, abandoned or separated from their families in Europe. America is the largest adopting country in the world. According to the U.S. Department of State, Americans have adopted 2,67,098 people from around the world from 1999 to 2016, approximately 30% of which have been from China. Other countries that top the list of donors in recent years include Congo, Ethiopia, Russia, Ukraine, South Korea, and Bulgaria.

Documentary | Abandoned in China, Adopted to the U.S.

The rise in Chinese adoption has its roots in China’s One Child Policy. Limiting the Chinese family size for almost 30 years from 1979, China’s national policy had an impact on not just the demographics of China but also on adoption practices in the United States.

Mraz remembers receiving faxes from Chinese orphanages in the early 1990s urging American agencies to help. “It was so shocking to us that the crisis was so large at that time in China. They literally couldn’t keep children alive in the orphanage long enough to even place them in the adoption,” she reminisces.

Chinese adoption increased rapidly around the same time, particularly in the 90s and peaked 10 years ago. What made China an appealing donor country was that the rapidly industrializing state of China unlike other donor countries like Guatemala, was not marred by stories of rampant bribery and coercion.

However, despite widespread belief, not all adoptions from China were without cost. Anne Donohue was surprised when the father of one of her students researching in Yiyang orphanages found that women called adoption ‘baby selling’. Adoption in these institutions was not seen as a grand humanitarian gesture but a transactional one with very real costs.

“It makes me incredibly sad to think there are women all over China that are wondering what happened to their children and don’t have any idea,” said Donohue. 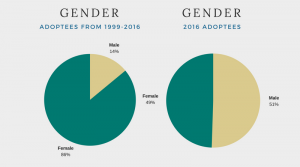 Intercountry adoption from China in the 1990s was not just an imperialist project but also a sexist one. China accounts for one of the most skewed sex ratios around the world. China’s National Health and Family Planning Commission is concerned with ‘future instability’ due to the gender imbalance created by the one-child policy. Indeed, the skewed ratio along with the shortage of economic labor were few of the main reasons to scrap the one-child policy.

Many attribute this imbalance to the traditional gender preference for a son over a daughter. However, Professor Kay Ann Johnson’s book China’s Hidden Children shows that is not that simple. She blames the western media’s exaggerated claims of Chinese preference for boys that glossed over the Chinese government’s suppression of domestic adoption traditions. Johnson found that these stories of adoption and gender bias generally ignored the fight of many families to keep their girl child. Johnson writes that were it not for government intervention and suppression, “nearly all relinquished healthy daughters in the 1990s could have found families who wanted them in China, leaving few healthy children available for international adoption.”

While the trend was generally skewed towards more female over male adoptees, 2016 is the first year that 51% of the adoptees were male, overall and also from China.

The Multiracial Family and Identity

Most grappling of these questions was the for the adoptees -- how to identify themselves. Amy Pollard, a student at Boston University, is deeply rooted to her Chinese-American identity. She jokes about how of her Chinese friends talk about her being a “banana”, yellow on the outside and white on the inside. Growing up in a suburban all-white neighborhood, Pollard doesn’t feel she has a lot of ties to her Chinese identity.

“There’s just a lot I want to deal in life, and I don’t want to just be caught up in this whole search for whatever is out there in terms of my identity or my birth parents or whatever,’ said Pollard when asked if she ever wanted to search for her family.

Donohue remembers that her daughter Katie Conlin cried in her first grade wondering what happened to her birth mother when the reality of her adoption first set in. Katie also identifies herself as a Chinese-American. Donohue’s family lovingly refers to her as “Chi-rish”, half-Chinese and half-Irish, since most of the Donohue family has its roots in Ireland.

Donohue and her husband tried looking for Katie’s birth parents in 2008 but came up empty-handed. Katie also took a DNA test recently to find her ancestry but could find little aside from the fact that she was Chinese. Donohue hopes that as China relaxes its laws, more mothers will come forward and the gap between the adoptee and the birth family will be bridged.

Mraz believes that assimilation for the transracial adoptees is much easier now than it was for the first wave of Chinese adoptees in the 1990s. Families of adoptees have access to a variety of books, films, schools and places that can help the adoptees reconnect with their Chinese roots. The growing presence of adoptees has also helped create space for a new identity for these adoptees.

Research by Dr. Rebecca Compton in her book Adoption Beyond Borders shows that transracial adoptees in white families do about as well as their non-adopted siblings on a variety of indicators like self-esteem and ethnic identity. Additionally, a large-scale study involving thousands of participants has found no difference in self-esteem between adoptees and non-adoptees.

Adoption from China has fallen by 86%

Overall, adoption has seen a downward trend in the recent years with intercountry adoption dropping by 24% from 2015 to 2016. Adoption from China has fallen by 37% in the past four years and overall 86% since the late 1990s. 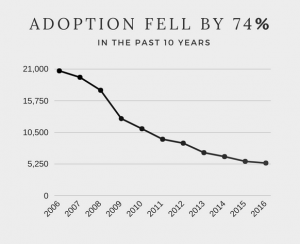 This trend can be attributed to multiple factors, from the tightening of adoption laws and increased surveillance to the end of the decline of the one-child policy. A major factor in this has been the implementation of the Hague Convention on the Protection of Children and Co-operation in Respect of Intercountry Adoptions. The Hague Convention has helped create tighter and uniform regulations on international adoptions and bring them into a universal legal framework. There is a real cost for countries who turn a blind eye on trafficking or have lax regulations. For example, after multiple reports of abuses, the U.S. State Department stopped approving adoptions from Guatemala in 2008.

The Hague Convention also allows donor countries to establish their own restrictions, a rising trend in China. China signed on to the treaty in 2006 and has since imposed stricter policies on adoption. Some of these have been arbitrary like a ban on adoption by foreigners who are unmarried, above 50, overweight or on antidepressants.

Harvard’s Adoption expert Elizabeth Bartholet believes that these measures have broader geopolitical aims and are enforced to change the perception of China globally from a third world nation to a first world nation.

“One way to make that statement is to say: We can take care of our own kids. We don't need you,” she says in an interview with Priceonomics.

In recent years, Mraz has also observed that adoption from China is moving towards a special needs program.

“The children in the orphanages deemed eligible for international adoption are the ones who are not able to find Chinese families,” she says. “They have special needs, usually medical needs, orthopedic needs, or they are older, those children often have a lot of possibilities in America and also in Europe for the most part, to succeed in life that they may not have in China.”

Interested in reading more? Explore adoption through the eyes of... 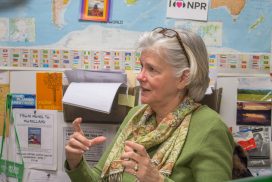 A veteran journalist and professor at Boston University who adopted her daughter Katie Conlin from Yiyang, Hunan Province of China. 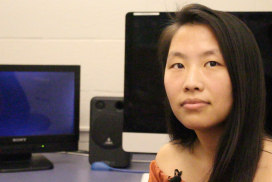 A graduate student majors in International Relations at Boston University who was adopted from Yangzhou, Jiangsu Province of China

Director of International Programs at Wide Horizons for Children, an adoption agency in Waltham, MA, with 30 years of experience in international adoption.